From the journal of Miss Susanah Wellington (1819-1838) of Yeovil, Somersetshire. 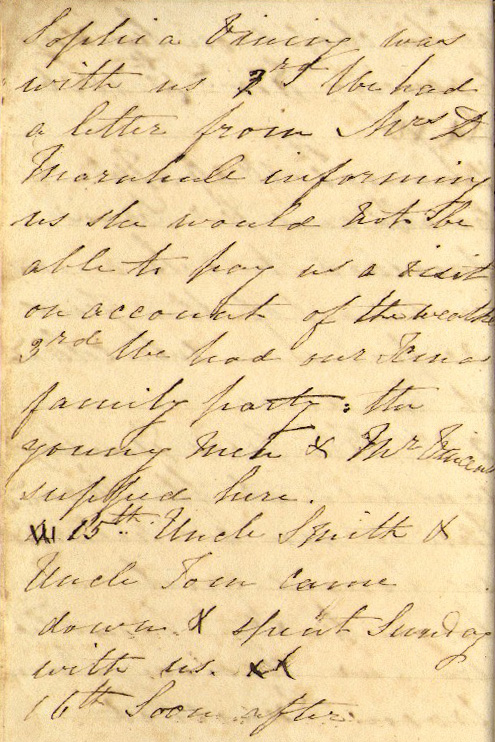 2nd. We had a letter from Mrs D Marshall informing us she would not be able to pay us a visit on account of the weather.

15th Uncle Smith & Uncle Tom came down and spent Sunday with us.

In Susanah’s previous journal entry of December 1836, we read about Rev Jukes and the Jews meeting.

The Wellingtons of Yeovil had friends and family visiting for the 1837 new year holidays. The weather was very bad. Heavy snow started to fall on Christmas Eve, 1836. There was a great east-north-easterly gale and snowstorm on 25th and 26th. Many lives as well as livestock and crops were lost. Roads throughout England were impassable for days, snow 5 to 15 feet (1.5 to 4.5 metres) deep in many places, a few great drifts 20 to 50 feet (6 to 15 metres). 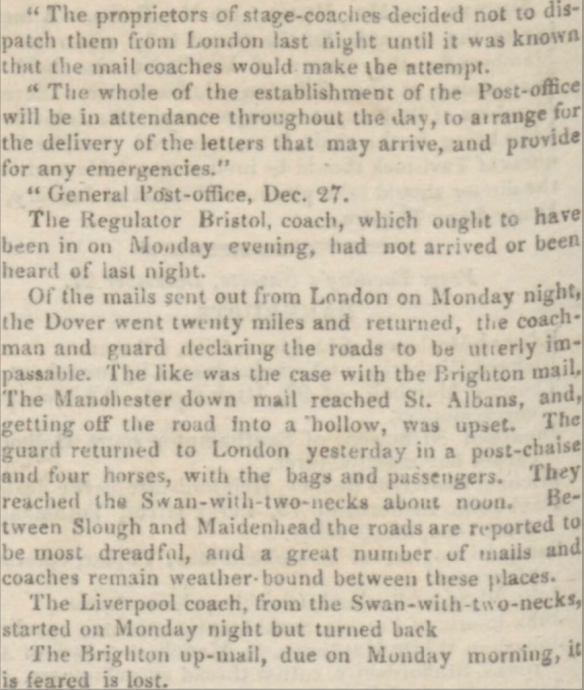 An extract from a newspaper report, gives an idea of how the severe weather impacted life throughout England. Western Flying Post, Sherborne and Yeovil Mercury, 02 January 1837.

The snow storms in late December 1836 covered the roads in large drifts. The regular stage and mail coaches were disrupted which brought business to a stand-still. The stage coaches and mail coaches could not get through, goods and shipments could not be delivered, and general trades could not do business or work outdoors in such bad weather.

Illustration of a bountiful Christmas feast from a Comic Alphabet, designed, etched and published by George Cruikshank, 1836.

The Wellington family held their Christmas party on the 3rd of January. It may have been a tradition to celebrate with family in the new year, or their gathering was delayed due to the bad weather. Susanah mentions the young men and Mr Vincent shared Christmas supper with the family. The “young men” may have been the chemist apprentices and shop assistants in her father’s employ. Mr Vincent was probably a family friend.

On the 15th January Uncle Tom and Uncle Smith visited the family in Yeovil. Thomas SAMSON (1806-1879), was a younger brother of Susanah’s mother Elizabeth SAMSON (1764-1833). Uncle Smith was William SMITH (1801-1879) the husband of Elizabeth’s youngest sister Susannah Sharp SAMSON (1806-1843). They lived in Wayford, about 20 kilometres (12.5 miles) south-west of Yeovil in Somerset. You can read more about the SAMSON family connections here.

I am sure Susanah enjoyed good cheer with her family and friends in spite of the cold and miserable weather, which continued well into March, April and May. The English Spring of 1837 still holds the record of the coldest ever seasonal average at just 5.6 degrees C.

Sources: Susanah Wellington’s Journal, BUCK family collection. You can read more about it here: susanah’s journal – somerset to sydney; www.dorsetshire.com. You might like to see other work by George Cruikshank; British Newspaper Archive; Historical Weather Events.