I found this article on NLA Trove newspaper archive, in the Sydney Morning Herald, dated Tuesday 22 September 1914. It gives an insight into the new recruitment arrangements for those enlisting in the Australian Imperial Forces (AIF), one hundred years ago.

Extract from article in the Sydney Morning Herald, 22 September 1914.

The new arrangements for recruiting from the country came into operation yesterday, and there was a marked improvement in the number of these men coming forward. It is now no longer necessary for applicants to pay their own fares to Sydney and have a receipt in order to get a refund at this end. When passed by local Government medical officers the men are given a pass, as ordinarily used by the Police Department, the Commonwealth Government subsequently making good the amount to the Railway Department. These passes can be obtained at any country police station. In the case of those under 21 years of age the written consent of parent or guardian is required. With this Lieutenant Colonel Antill, the enrolling officer is prepared to take men under 19 years of age – the limit first provided – but they must be over 18 years. The acceptance of applicants, particularly these minors, is a matter left to his discretion. 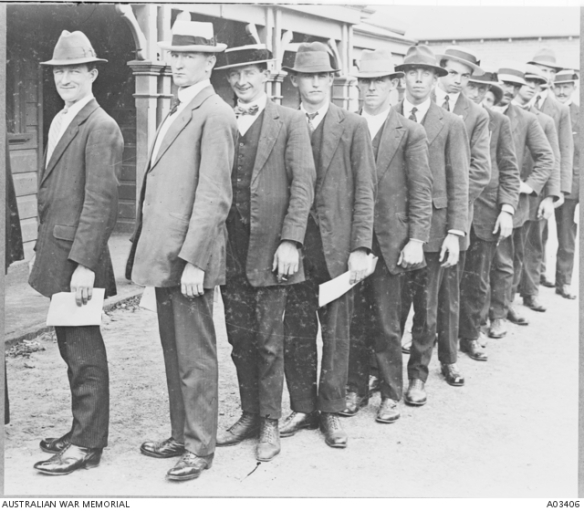 The service will accept married men and widowers with children provided they can state that they are aware that no separation allowance will be issued either before or after embarkation and that they signify, on the form of attestation their willingness to allot at least two-fifths of their pay (not including deferred pay) while abroad to their wives, or in the case of a wife and children at least three-fifths. Applicants for enrolment are not to be over 45 years of age and must of course be of the required physique.

Intending recruits from the metropolitan area can apply as usual at the barracks and be allocated to duty, subject to their passing the medical examinations, which after tomorrow will be conducted at the Rosehill Racecourse. Batches will be sent away by train leaving each day at about 3 p.m. The recruits will then be taken in hand by the different officers and placed in their respective ranks. A matter of interest to city men is the requirement of good artisans for the Army Service Corps. Fifty-five men were sent there yesterday as drivers. Now word has been received to enlist men (not too heavy) who are qualified saddle or harness makers and others who are good at tent making.

The ranks of the artillery and engineers are filled as far as the New South Wales quota of the second contingent is concerned but the other branches to make up the 3,000, have vacancies for over 1,000 altogether. The enrolling officer is being inundated with letters from country applicants seeking advice, and he wishes it to be made public that the police everywhere have been instructed what to do. Men cannot, he says, pick their jobs. What they are required to do is to get their medical certificate of fitness and a free pass to Sydney. Their services will thereafter be placed to the best advantage. All cannot go to the Light Horse the Army Medical Corps or the Army Service Corps, but men will not be sent to the infantry if they are specially qualified for these other divisions.

As to those who want commissions in the expeditionary forces it is pointed out that it is no use applying to the enrolling officer for these as many are doing. Colonel Antill does not doubt that some of the applicants are deserving of appointment but all he can do is to have their names registered. It rests with the officers commanding the respective divisions to select those considered to be most suitable, and make recommendations accordingly to headquarters.

Yesterdays enrolments did not constitute a record but the total (270) was a distinct improvement. The country was well represented and all the men were of excellent physique. One applicant was from the Northern Territory. He said he had been doing “kangarooing and driving,” and being in Sydney he thought he would “give a look in.” “Can you ride a rough horse?” asked the Colonel. “I must have slipped a lot if I can’t,” was the quaint reply. “We shoot kangaroos on horseback-and,” he continued “I can cook and track.” He was sent to the Light Horse. Another man could “shoot a bullock on sight.” “Can you ride?” the officer asked of another. “I cannot say that I am exactly a sticking plaster, but I can stick on as well as most of them.” “You look it,” said the officer who included him also in the Light Horse. A man who had driven live horses in George-street and four in a plough was sent to the Army Service Corps. This corps benefited also by a physically strong man, who was designated a stretcher-bearer. A hod-carrier equally powerful was sent to the ammunition column. In reply to the Colonel he said, “he did not care how heavy the shells might be so long as some good might be done with them.” A “bushman” from Gosford was sent to the Infantry. An undergraduate never added “Sir” to his replies and was told to cultivate the habit. He was sent to the Infantry. The day’s total included about a dozen men who had served in the Boer war.

The 1st Infantry Brigade exercised yesterday at the Kensington Racecourse, there being no route march.

The 2nd battalion of the 1st Infantry Brigade will leave the Kensington racecourse this morning at 8 o’clock for a route march via the Central Railway Station to Harris-street. The force, which should pass the station at about 9.15, are expected to return to camp in time for lunch. Colonel Braund will be in command.

Mr. Dunn M.L.A., will, the enrolling officer says, be eligible for inclusion in the Light Horse Brigade when he has completed his private arrangements. Dr. A. Mark Stanton of Granville has been gazetted captain in the Army Medical Corps of the Commonwealth defence forces, and has been attached to the 20th Regiment with headquarters at Parramatta. Mr. William Barry, son of Senior-sergeant Barry of the North Sydney police, who is leaving with the expeditionary force, was yesterday presented with a purse of sovereigns at a social gathering in the North Sydney School of Arts. 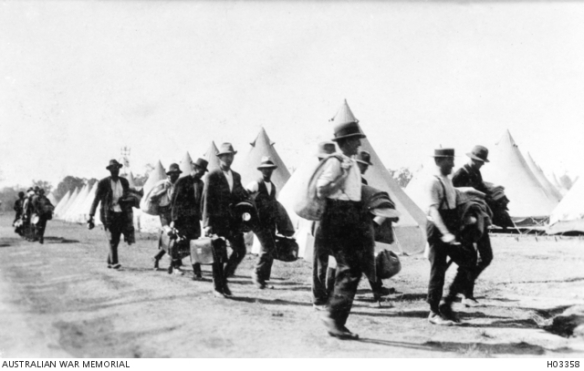 The Minister for Public Health stated yesterday that nearly 10 per cent of the general staff attached to the administration of the Lunacy Department has been accepted for service with the Expeditionary Forces. The male staffs of the various hospitals for the insane exclusive of officers comprise 586 men and 53 of them are going to the war. One of the matrons Miss Pocock of Gladesville is going to the front having joined the Army Medical Service, in which she served during the South African war.